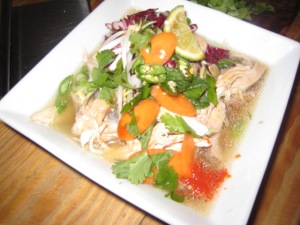 Saturday morning Amy woke up with a “slightly scratchy throat but I’m fine” statement. She is the type who never gets sick and must be near to death before admitting she doesn’t feel well. I however know better. It is a game of wait for it, wait for it. As the morning ticked away and after exictingly accepting an invitation for game night with our favorite around the corner pals Ana and Patti, I finally coaxed Amy into admitting that she actually wasn’t feeling well at all. We were then forced to take a rain check for game night in hopes that a quiet Saturday evening in would help Amy conquer her “slightly sore throat.” Needless to say that by the time Sunday morning rolled around Amy’s superwoman persona was crushed by the common cold.

After our  “Amy hasn’t had a cold in over four years” meltdown, I found myself out early Sunday morning shoveling up snow with the disheartening task of grocery shopping alone looming over me, much like a childs slow shuffle towards the detention room after school. Gathering ingredients is one of my most favorite ways to share time with Amy. I have so much fun inhaling this herb, carefully choosing this tomato over that one, and having my flavor baby right by my side. But alas my partner in flavor was benched by a severly sore throat and nasty nasal congestion so off to the grocery solo I went. The recipe must go on!

My first stop was just past the “X” on Belmont Avenue at a little shop called Saigon Market. Saigon Market is my favorite and first choice for any and all ingredients related to Thai and Vietnamese style cooking. They have a plethora of fresh ingredients including (one of my favorites) Holy Basil,  fresh curry leaves, fresh mint, ginger root, fresh lemongrass, Thai bird chiles, fresh cilantro, limes, green scallions, and on and on the list goes. They also carry a plethora of dried rice noodles for any recipe occasion. But just below the obvious reasons I love to shop there, is my underlying secret ego reason – the shop owner (I assume she is the or one of the owners as I’ve never been in the shop when she isn’t working) is eager to lend me precious, priceless ingredient advice. Her gracious tidbits and hints made me feel more apart of my community than anything has. This go around after asking me what I was planning on cooking, she helped me pick out the perfect noodles for Pho. I immediately rang Amy once back in the Baja to share my elation with how the owner once again offered me unsolicited cooking advice.

Pho is pho because o 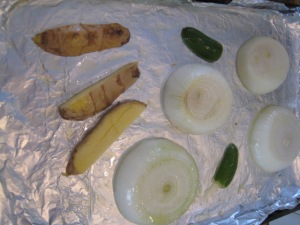 f the charred onion and ginger and the toasted array of spices. This can not be skipped or else you are back to plain-Jane c 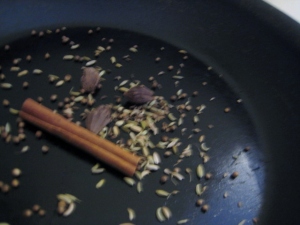 hicken soup, and that will never do! It is preferable to char the onion and ginger on an open flame but you can also use a gas broiler to render the same effect, which is what I did along with one jalapeno until the skins were blackened and blistered. With my internet research I found several spice combinations from the very simple such as clove and coriander seed to the more complex such as star anise, clove, cinnamon stick, black cardamom, coriander seed, and fennel seed. I had all the spices on hand but the star anise so I omitted that and added anise instead. So my spice combination equaled anise, clove, cinnamon stick, black cardamom, coriander seed, and fennel seed. I toasted all the spices until just fragrant and then removed them from the pan to avoid burning. I then chose to wrap my toasted spices and my charred aromatics in cheese cloth so I would not have to worry about straining the broth later. 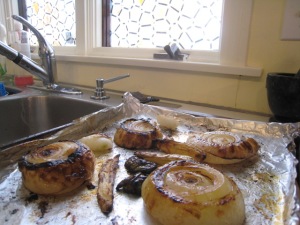 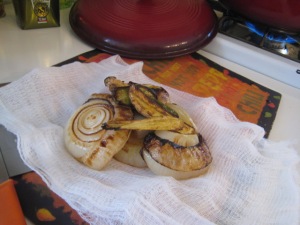 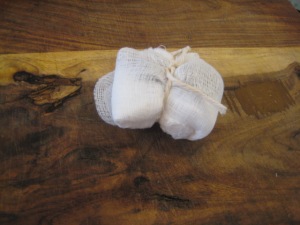 With my spice and aromatic bundles all tucked and tied with kitchen twine, I hefted my Lodge Enameled Cast Iron Dutch Oven from its perch on the hutch and carried it over to the stove top. This is no small feat but pales in comparison to the task of lifting the Dutch oven with bird and water inside from the tap back to the stove top, which is what followed after a short breather from the trip from hutch to stove. The damn thing is heavy but I love cooking with it!  Unlikely admission: I HATE touching raw poultry. It freaks me out, especially when I must fish the nasty bits out of the cavity of a bird. Gross! Gross! Gross! SO I try to buy poultry with an empty cavity. In this instance I do not mind my hen being all empty inside. And the organic “smart” chicken I purchased from Fresh Acres was perfectly empty inside! I much prefer a smart, empty, organic chicken over an angry, force fed, factory chicken any day! So due to my aforementioned fear of raw poultry, I VERY lazily, after rinsing my little organic smart chicken, stuck her in th

e hot tub without deconstructing first. I decided I would debone the chicken once it was perfectly simmered and perfectly not raw. Also to the hot tub, along with the chicken, I added both my bundles, about 2/3 cup of fish sauce (vary according to taste), a splash of light sodium soy sauce, one sliced orange bell pepper, two to four 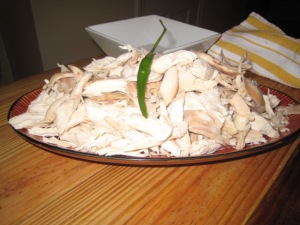 dried De Arbol chilies, and four fresh bay leaves. I then brought the broth up to a boil, reduced to low flame, covered with the lid, and allowed it to gently simmer for about three hours. WoW! My house smelt amazing! After the broth had simmered away for several hours, I removed the chicken very carefully and set it aside to cool completely. Once cooled, I removed and discarded the skin and bones of the chicken and roughly pulled the chicken apart into bite size portions. The chicken was wicked tender and fell off the bone effortlessly and into nice size chunks with little effort on my part. Also I removed from the broth the bay leaves, both bundles, and the orange bell pepper slices and discard them. Now for the best most low-fat option, simmer your stock the day before, allow it to cool in the fridge over night, and then carefully skim the layer of fat from the top of the chilled stock. But since Amy was feeling very poorly, I served the stock same day and skipped this step until the following morning. 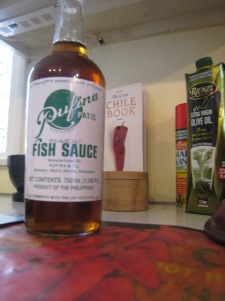 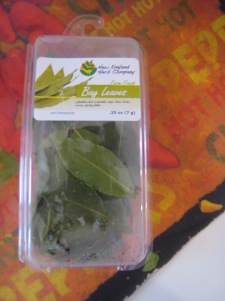 Since my  noodles were dried I simply placed them inside a colander, which I had first placed inside a large glass bowl, and then poured boiling water over them. I let the noodles reconstitute for about 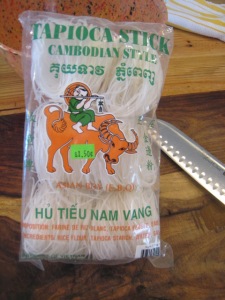 15 minutes or so. It simply depends on how soft you prefer your noodles. Amy must have “mushy” noodles so I usually stee 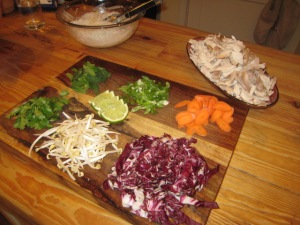 p them much longer than I would actually recommend, but the goal of a chef is to appeal to the hungry mouths you are feeding right? So once the noodles were nice and mushy I strained them, tossed them with a tab of butter, and wha-la! they are ready to serve.  Now you may garnish your Pho Ga with any flavor combination you prefer. Typically you will find mung bean sprouts, fresh cilantro, lime wedges, Siracha, & Hoisin sauce. But ultimately it’s your Pho so garnish it per your own preferences. For the heat factor I used chopped fresh Thai bird chiles and a bit of Siracha sauce. Amy opted for a smidgen of Chili Oil swirled into her broth for heat. Neither of us opted for the Hoisin sauce but a few extra dashes of light sodium soy sauce rounded out our bowls perfectly. So my garnished bowl of  Pho Ga ultimately included  fresh cilantro, mung bean sprouts, fresh mint, chopped raddichio, sliced carrot, sliced green scallion, a drizzle of Sesame Oil, a dash or two of light sodium soy sauce, fresh chopped Thai Bird Chiles & Siracha for me, and a smidgen of Chili Oil for Ames. 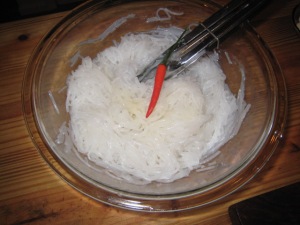 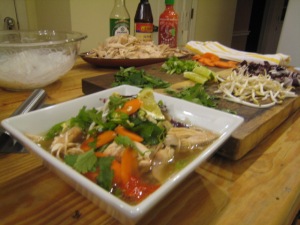 u’ve finally narrowed down what garnishes you wish to use, all you’ve got left standing between you and a simmering bowl of fabulousness is to assemble your Pho Ga. I first add to my bowl the  rice noodles, then the deboned chicken, and then I ladle the delicious broth over that. Next I top it all off  with my garnishes, drizzle the drizzle-able, pump up the caliente,  and then serve with an oversized spoon and a pair of chopsticks. Finally I’m cashing in on a much-needed stay in flavor town!

I must say that the Pho Ga was delicious and I am very proud of my results, especially seeing some color return to Amy’s checks as she slurped down her second bowl. An inexpressible emotion showers over me as I watch others enjoying the food that I have cooked. And this dance with Pho Ga was even sweeter for me as I know I helped deliver a moment of relief from Amy’s raging, uncaring cold. 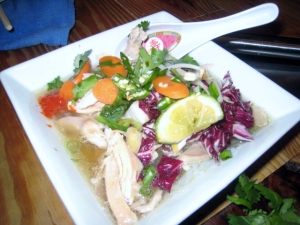 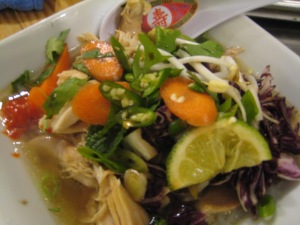 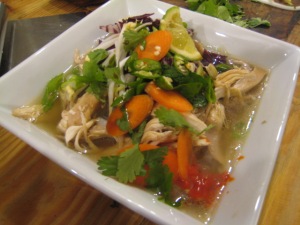