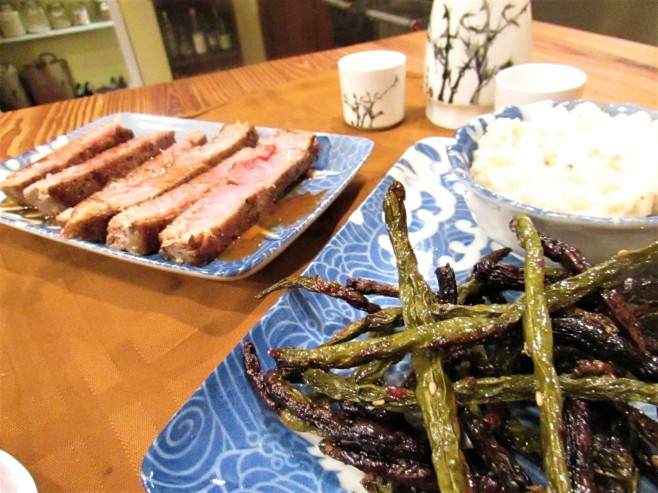 The most likely second runner up to all my taco posts, are the tuna ones. Since dining together as a family is unpredictable and less often than desired, I enjoy putting in the extra effort to make our dinners together as special as I can. To elevate this dinner, I served it with a nice bottle of Sake, which honestly was more for me than anyone else. This recipe sounds more complicated than it is and if you don’t have time to fool around with reducing a glaze feel free to skip it altogether or use your favorite premade preference to accompany the tuna.

In a small mixing bowl, whisk together the orange juice, miso paste, and hoisin sauce. Add the sauce to a small saucepan and bring to a boil over a medium high flame. Turn the flame to low and continue to simmer until sauce has reduced to desired consistency. Salt and pepper to taste. Set aside. Evenly coat the tuna steak in the Toasted Sesame oil on all sides. Salt and pepper. Set aside. Over a med high flame, heat a nonstick skillet until it is searing hot. Once hot, sear the tuna on each side for 3 to 4 minutes for medium rare, longer for medium to well done. Set the tuna aside and allow it to rest at least 5 minutes. Serve the tuna sliced with the miso orange reduction.

Preheat oven to 425 degrees. In a shallow casserole or baking dish, toss the green beans with the oil, red pepper flakes, sesame seeds, salt and pepper until well coated. Place in the oven and roast until the green beans are blistered 10 to 20 minutes. Remove from oven and adjust seasoning as desired. Serve immediately.

1 head of Cauliflower, cored and trimmed

2 tablespoons Wasabi powder, or to taste