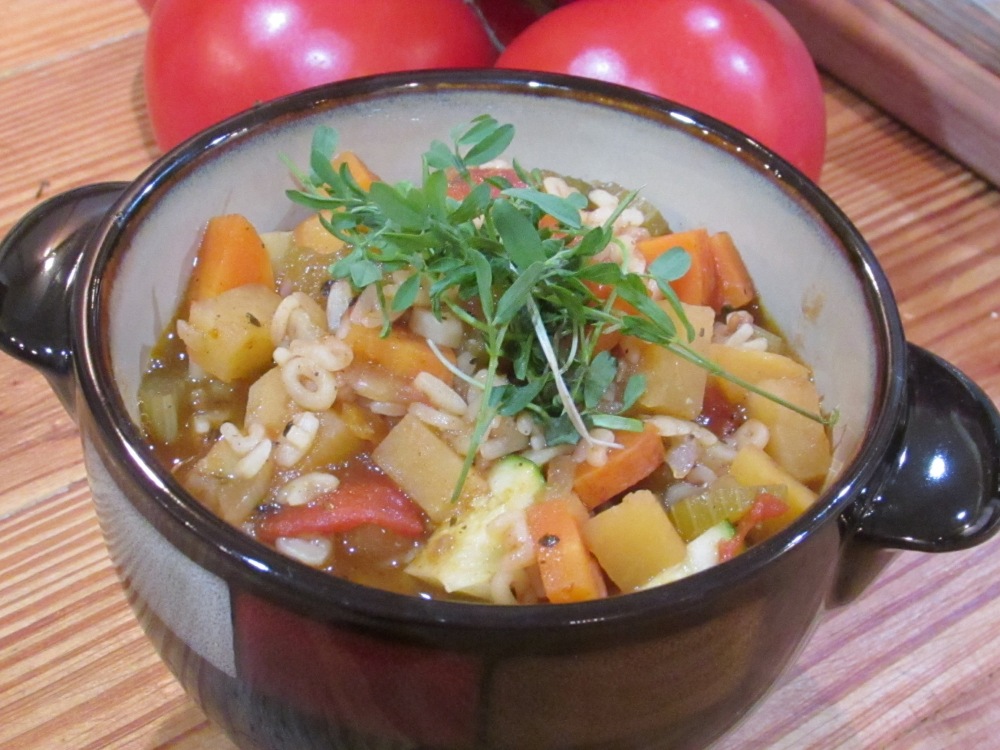 Who remembers opening a can of Campbell’s Alphabet Soup as a kid and trying to spell out words? I always liked to spell my name, if I could. There was just something about little A’s and B’s and C’s floating around in my bowl as a kid that was just exciting. It’s been more than a decade since anything Campbells has lined the shelves of my pantry but nostalgia doesn’t care how healthy you wanna eat as an adult. Initially, I’d intended this recipe to be a Barley Vegetable Soup but after mentioning it several times to the sound of crickets I could read that my better half wasn’t feeling the barley at all. After a little prompting, she finally admitted she doesn’t like barley. Something about the way it looks; I dunno. So that gets bumped to the solo dinner menu from now on. I still wanted soup and I still had a ton of veggies in my fridge that had to be used.

So I deliberated in my pantry for a few moments and then grabbed a jar of dried Alphabet pasta from the shelf. So much for low carb. Ah well, I do aim to please so what’s a once removed Southern gal to do? Admittedly, I got excited about cooking up a batch of the old school version of vegetable soup instead of the original barley one I’d been planning on. Plus, I just wanted any excuse to use the cute little bowls Amy got me for Christmas. I’ve got all kinds of ideas on using these bowls with their precious little lids. I see a batch of French Onion soup in my near future.

Note: feel free to use whatever vegetables you happen to have on hand for this recipe. I like to use this soup to clean out my fridge and prevent waste from spoilage. Also, go ahead and use barley too if you like. I’m sure it will be delicious.

2 to 3 fresh Tomatoes, cored and diced

In a med Dutch Oven or soup pot, bring the vegetable stock, garlic powder, all vegetables except the zucchini, and dried herbs up to a simmer over high flame. Once simmering, reduce to med low flame and continue to cook until vegetables are fork tender, about 15 minutes. Salt and pepper. Add in the pasta and cook about 8 minutes, or per package instructions. Stir in the zucchini and cook about 5 minutes more. Turn off the flame, cover the soup, and allow it to rest 5 to 10 minutes. Taste and adjust seasonings as needed. Serve immediately and garnish with Italian Microgreens, if desired.