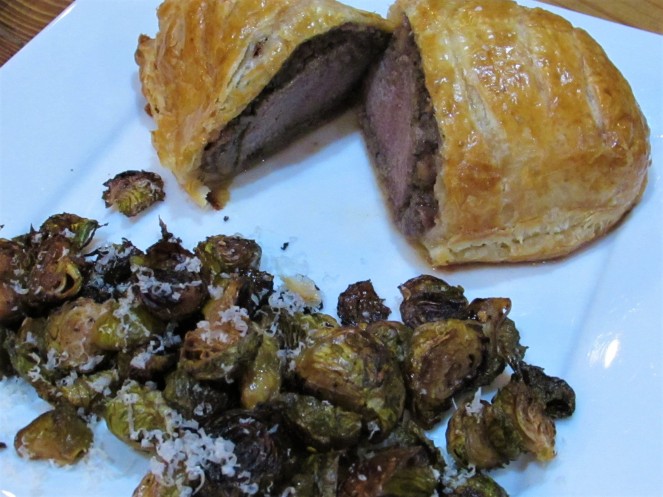 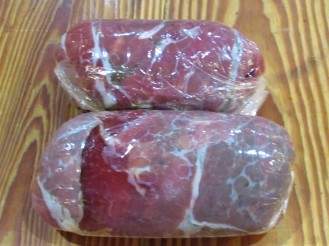 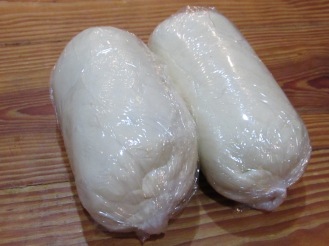 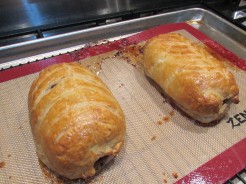 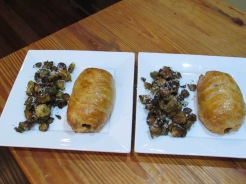 To welcome the winter season, the wifey and I decided to try our first attempt at Beef Wellington. We are shamelessly addicted to Hell’s Kitchen and perhaps being caught up in the Gordon Ramsay F bomb drama had something to do with us deciding to take on this challenge. What can I can say? When he starts punching undercooked salmon and making those cocky chefs lose their cool I get all tingly inside. Plus, it’s just wicked funny.

Beef Wellington isn’t as complicated as it is tedious. There are several steps involved, which increases the chances of screwing the recipe up. I think we watched the below video half a dozen times or so:

I documented our process in the above photo gallery. To begin, I first prepared the Duxelles with Cremini mushrooms, fresh Thyme, and Chestnuts. The mushroom paste was perfectly earthy, faintly herbaceous, and a delightful pairing with the salty ham. Once the mushroom paste had reduced, I seasoned each filet with Celtic Grey salt, fresh cracked black pepper, and finely chopped rosemary. I let them hang out in the seasoning a bit and then quickly seared the little cuties off in my cast iron. I subbed Dijon in place of the English Mustard and generously basted the filets immediately out of the pan. Amy then perfectly wrapped each filet in the parma ham/mushroom paste, we let them rest in the fridge, and then Amy finished by delicately tucking the savory little logs inside the puff pastry (which we bought at WF). We even each made our own “chefy” marks on our pastry with the back of a paring knife, basted them generously with melted butter, and sprinkled salt on the tops. They looked surprisingly, amazingly pretty similar to the video. We were stoked!

Now, the moment of truth is in baking them so that the outside of the Wellington is golden brown and orgasmically flaky while keeping the filets a sexy medium rare. Not so difficult if you follow the instructions exactly right? As per the above photos, we experienced a teensy little hiccup here.

200 degrees for 35 minutes, depending on how rare you like your beef.

So that’s what we did. The oven beeped at 200 degrees and in we popped our Individual Beef Wellingtons. We then triumphantly kicked our feet up and started sipping on another round of adult beverages feeling quite pleased with ourselves. About 15 minutes later it hit Amy like a bolt of lightning. Gordon Ramsay meant 200 degrees CELSIUS not FAHRENHEIT! I was like, “We both heard him say 200 degrees. Like all his restaurants are in Vegas, right? Why would he mean Celsius?” Sure enough though, and because we are literally the only blokes that don’t use the metric system, the correct translation of 200 degrees in the above video is 392 degrees Fahrenheit! Insert major F bombs of our own followed by numerous eyerolls at each other as we hurried downstairs to bump the oven up to 400 degrees FAHRENHEIT. What a rookie mistake!

I could just hear Ramsay screaming at us,

Yup, the damage had already been done. The inside of the Wellingtons cooked too long at the lower temperature, which prevented the outside puff pastry to crisp up. So in order to crisp the pastry, we had to overcook our filets. Luckily for us, we source our filets from an incredible local butcher, who sources incredible cuts of protein from local farmers. So the filets were still tender as butter even at well done, thankfully! The Wellingtons, in spite of our little snafu, were exquisitely delicious! An absolute mouthful of luxury! The flaky, buttery pastry, the salty ham, the earthy mushroom chestnut paste, the tender little hunk of fillet! OMG that first bite completely made up for the initial disappointment we both felt at the absence of a bright pink center. Beef Wellington is officially my new favorite holiday meal! It’s kind of difficult to describe in words how utterly scrumptious Beef Wellington is. It’s just something you have to experience for yourself.

We are determined to make this recipe again and set the oven at the proper temperature for round two! Despite the overdoness of the filets, we both considered our first attempt at Beef Wellington a success overall. This was a really fun recipe for us to work on together and we enjoyed the time we shared in our kitchen creating a marvelous meal together. I think we’re gonna give round two a go for Valentine’s Day, as this is a perfect date night kind of recipe.