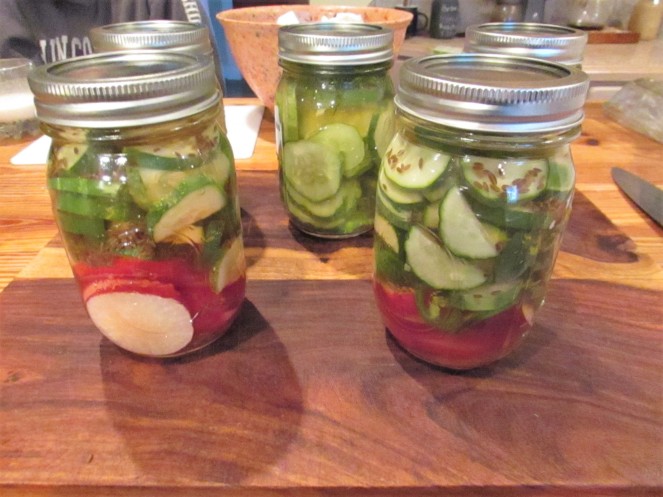 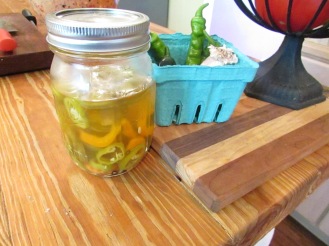 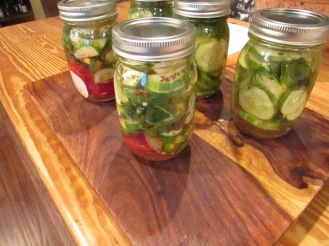 For the past several months I’ve been experimenting with incredibly basic canning techniques. Refrigerator pickles and hot peppers is as far as I’ve gotten, but I have attended one demonstration with a pressure canner, thanks to a couple of dear friends, and my confidence is building. In the near future, my goal is to can and preserve as much as I can from my own garden/local markets in order to eventually cut ties with grocery store chains/Big Agra entirely, even through the winter. Mostly, I want to feel more self sufficient, save a little money while I’m at it, and of course do my part, however small, to support our environment. Aside from that, it’s just fun and exciting to grow, harvest, eat, and preserve your own food.

The pictures above represent my very first attempt with refrigerator pickles and I used a recipe from Better Homes and Gardens Canning magazine. This particular recipe called for the use of straight white vinegar, and be forewarned that these pickles have quite the pucker! I did 2 jars with fresh dill and cucumbers only, 2 jars with fresh dill, radishes, cucumbers, and jalapenos, and 1 jar with fresh dill, cucumbers, and jalapenos. Although the recipe was a bit too sour for my liking, I have not been deterred from snacking on them most every day. I’m down to my last two jars and am excited to experiment further.

The second batch of canning I tried, I harvested jalapenos from my garden and used the first quick pickled hot pepper recipe I found on Google. This recipe called for half white vinegar and half apple cider vinegar. I added the jalapenos of course, sliced carrots, and half a sliced orange bell pepper. The apple cider vinegar really enhanced the flavor of the pickled peppers and I much preferred the half and half version over the white vinegar only recipe, as the pucker was thankfully toned down by the ACV. As you can see, the hot pepper jar is already half empty. I’ve got another round of jalapenos and cayenne peppers in my garden nearly ready for harvest and hope to have a recipe perfected of my own to post soon.