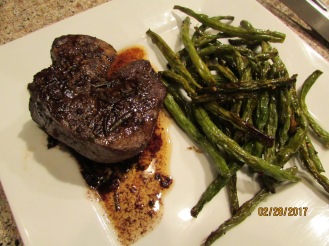 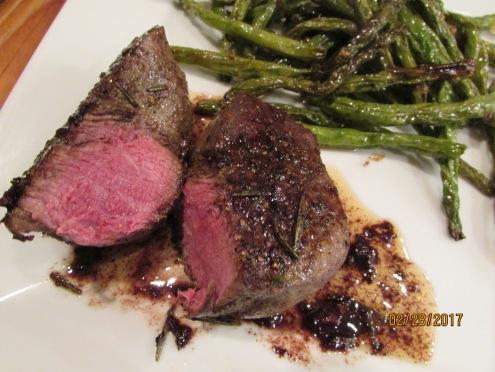 Although I encouraged her to do something EPIC for her 50th birthday, Amy decided she wanted to spend a night at home enjoying her favorite meal. She’d had a couple of crap weeks on the road dealing with hospital politics and drama, which really helped in swaying her decision to celebrate her birthday in slow motion. She invited me to travel with her and keep her company in Virginia Beach, then DC the week just before her birthday, and although that did help soften her work stress somewhat I have to admit that staying in and enjoying a quiet evening together was the right choice. Amy definitely deserved and needed some downtime at home. She requested butter basted steaks of course with super garlicky spinach and I was all too thrilled to whip up a special birthday dinner for her.

At least an hour before cooking the steaks, take them out of the fridge and allow them to reach room temperature. Lightly coat each steak in the EVOO and generously salt and pepper each side of the steak. Set aside. Over a high flame, heat a cast iron skillet until it is smoking (turn your vent on if you have one). Sear each steak about 3 minutes per side until a nice crust is formed. You can lightly sear the steaks on all sides, if prefered. Once the steaks are seared, reduce the flame to medium, add in the butter, garlic clove, and sprig of rosemary. Lift the skillet very carefully (the handle will be very hot) and baste the steaks in the butter turning them occasionally until the desired internal temperature is reached. I use the thumb to finger method to check for doneness but a med rare steak should be between 130 and 145 degrees, depending on how blue you like it. Once finished, remove the steaks from the skillet, place them on a plate or cutting board, lightly cover them with a kitchen towel, and allow them to rest at least 10 minutes. While the steaks rest, prepare the red wine au jus. Remove the garlic and rosemary sprig  from the skillet. Over a med flame, deglaze the same skillet with the red wine and one cup of water. Be sure to scrape up all the fond from the bottom of the skillet. Reduce the sauce until the alcohol has cooked off the wine. Remove the rosemary from its sprig, discard the sprig then chop the rosemary along with the garlic before adding back to the skillet. Once the sauce has thickened, adjust seasonings if needed then remove from the flame and serve over the fully rested filets.

Salt and Black Pepper to taste

Over a med flame, saute the chopped garlic in the EVOO until it is slightly golden and fragrant. Add in the spinach and gently toss it as it begins to wilt until the spinach has fully cooked down. Salt and pepper to taste. Serve immediately.

Salt and Black pepper to taste

about a 1/4 cup of shredded fresh Parmesan, reserved

Preheat oven to 350 degrees. In a large casserole dish toss the green beans in the EVOO, lemon juice, red pepper flakes, Everything seasoning, salt and pepper. Roast the green beans about 30 – 40 minutes until they are crisp on the edges, or until desired doneness is reached. Remove them from the oven and toss in the parmesan just before serving.